Setting of the Church

The parish church of St Michael & All Angels church is situated at the end of Church Street which is off the main road running through the village and is situated next to the 17th century bridge over the river Yarrow. 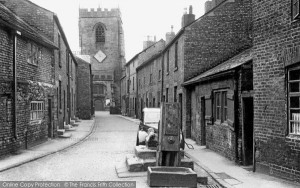 At the north end of the street stood the village pump (which was removed in the late 20th century) and the base of an ancient preaching cross which could have given the village its name.
The cross is a 20th century restoration.

The village is surrounded by farm land and is situated between the towns of Ormskirk and Preston.

As you walk around the village it is easy to see how the village has built up over the years by the architecture of the houses, and while there was a thriving business community and the Hall within living memory, sadly they have all gone with business sites changing into new housing estates and the Hall was demolished after being left to the Catholic Liverpool Diocese.

Despite this there are still a number of people whose families have lived in the village for a number of generations and are active in the life of the church and the village and are a wonderful source of historical tales about village life.

Most homes in the village are owner occupied with only 100 households receiving social rent, and a lower than the nation average number of people who are receiving unemployment benefits[1].

There is a joint Church of England/Methodist infant/junior church school and a Church of England Academy in the village. While the younger children are mainly from the village the academy has a catchment area which includes a number of villages in the surrounding area.

In the grounds of the church we have a disabled parking area, a choir vestry adjacent to the church and the old village school which is now a village hall which can be rented and used by the community.

The church land continues behind the church and has Bishop Alan Chesters Wood an area with a wide variety of trees including, horse chestnuts and a small leaf lime. A number of the trees have been planted in memory of people from the village who have died.

The area has been developed to be family friendly, with an eco-hut and a verity of play equipment suitable for a wide range of age groups.

It is popular with local families and it’s not unusual during summer for children to have their birthday parties in the wood.

Once a year we hold a ‘Music in the Woods’ festival with local groups providing the entertainment as the community join together to have a picnic and enjoy the music.

Behind the wood is a large grassed area owned by the church which we have transformed from a field rented to a local farmer into a place of natural beauty for the community.

A willing band of volunteers look after the field and it is already turning into a nature conservation area full of wildlife with native wild plants and a small wooded area at the top end of the field.

Both areas of the field have trees ranging in age from young through to trees hundreds of years old which are managed to ensure there will always be mature trees to replace those which will need to be cut down because they have died or been infected with decease.

Both areas contain over 37 varieties of wild flowers[2]  and are very popular with walkers and people taking their dogs for a walk. The council are supporting the project by providing specialist advice and funding and they have provided bins for the disposal of dog waste.

There are seats located around the area and a picnic table next to the river.

Social History & the History of the Church

While there is no record of how the village received its name a popular explanation is that during the time of Paulinus the first Archbishop of York who died in 644AD, a monk came to the the marshland and stuck his sharp pointed wooden cross into the ground next to the River Yarrow.

There has been a church in Croston since about 1075.

After the Norman conquest the Norman Count Roger of Poitou granted Croston to the Abby of St Martin at Sees.

The Prior and Convent of Lancaster presented the rectors until Edward the Third, when he claimed Lancaster for himself as an alien priory.

Croston remained in the hands of the Crown until Henry VII granted it to his new monastery of Syon near London in 1420.

The church keeps a traditional medieval layout, with a chancel at the east end with former chapels on each side of it. Before the Reformation in the 16th Century, all churches in England were Roman Catholic and the layout of the church relates to this tradition of Christian worship.

St Michael’s stands close to the Yarrow, a position which made it vulnerable to damage from flooding and waterlogged ground. The stonework tells a story of centuries of change as testament to those who rebuilt, repaired and adapted the fabric.
The earliest surviving remains are stone features of 13th century origin in the chancel. Otherwise the oldest stonework is probably of 15th century date.Records suggest that a substantial rebuilding occurred in 1577 and many other works are documented, with a succession of repairs in the 18th century. Rebuilding of the roof and other works in 1823, and major restoration in 1866-7 by architect Gordon Hills.
Differences in the stonework and types of window are clues to the changes.

Plan of church prior to the restoration work in 2017

1.4 The Church building in general, in detail and contents

The church is a historical treasure worthy of its original status as the parish church of Chorley and surrounding area.

The church has a fine collection of stained glass windows, monuments and the pews and choir stalls have embroidered cushions and kneelers which were made by members and friends of St Michael & All Angels parish between 1977 & 1992 and was started by Mrs Bruce, the Rector’s wife.

Jesus in the temple & the angel appearing at the tomb

Commemorating the Ormskirk –Preston railway line which passes through Croston